Posted by lasesana on December 15, 2012 in Communities @ The Washington Times | 4 Comments 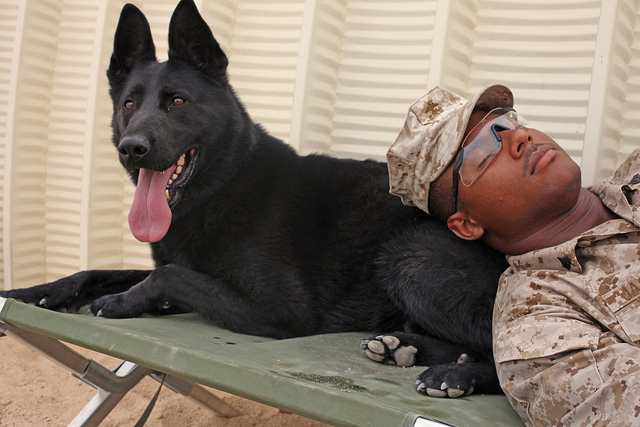 WASHINGTON DC, December 15, 2012- Military dogs that go overseas are classified as equipment and abandoned after they serve. Several organizations are lobbying to change this status while they help to bring dogs home and try to place them with families and with law enforcement agencies. 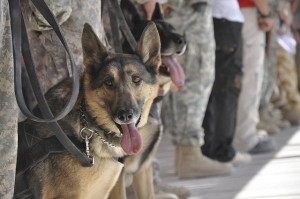 Dogs have been used in warfare by ancient Egyptians, Persians, Greeks, Slavs, and Britons. During the Roman Empire dogs were arranged in columns and wore armor and spiked collars. Dogs were also used by Attila the Hun and Frederick the Great. Napoleon chained dogs to the walls of Alexandria to warn of enemy attacks. Dalmatians were used on the borders of Dalmatia to warn of Turkish attacks from Croatia.

By the early 1900s, France, Belgium, Russia, and especially Germany used military dogs for scout duty, to warn of enemy attacks, find the injured, and to carry supplies and messages during combat. Even though dogs were used in the Spanish-American War and Civil war, the US officially began training dogs for the US army in 1942. During WWII, 15 war dog platoons served overseas as part of the army’s K-9 Corps. Dogs have served in Korea, Vietnam, Desert Storm, Afghanistan, and Iraq with bravery and distionction. Today, military working dogs are trained at Lackland Air Force Base for all branches of the military.

Like members of the military, working dogs go through battle training and face combat, explosions, and gunfire. Often dogs are sent into dangerous situations to protect the lives of their handlers and other soldiers. Military working dogs are invaluable in detecting explosives and chasing down an enemy on foot. Military Working Dog Adoptions, one of the organizations that helps to bring these dogs back from combat zones and place them in foster homes estimates that a military dog saves around 150 soldier lives throughout its service.

There is also much to be said about the bond that forms between war dogs and soldiers. They spend 24 hours a day together; they train, eat, sleep, and fight together. Many handlers consider working dogs their buddies and fellow soldiers. Many soldiers credit these dogs for saving their lives on the battlefield and providing much needed companionship.

In 2000, President Clinton signed a law allowing the adoption of military working dogs by civilians, former handlers, and law enforcement agencies in the US.

Republican Congressman Walter Jones has currently submitted to the Congressional Budget Office a bill that would reclassify military working dogs as “K-9 members of the armed forces” and make them eligible for official medals. The cost-analysis response from the Budget Office is expected in mid- February of next year.

Go back to articles from the Washington Times Communities