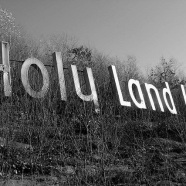 Holy Land, USA: from place of pilgrimage to creepy destination

Posted by lasesana on February 2, 2013 in Communities @ The Washington Times | 4 Comments

Once one of Connecticut’s most popular tourist attractions, this closed and decaying Catholic theme park continues to draw visitors looking for the unusual and kitsch. 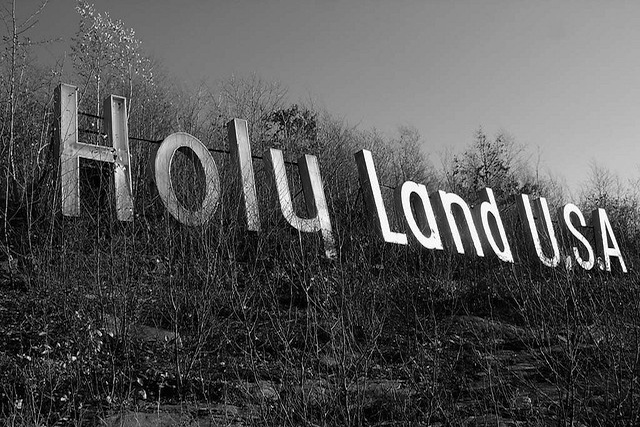 From my column in Communities @ The Washington Times

WASHINGTON DC, January 29, 2013– Today this decaying religious theme park in Waterbury Connecticut looks like the set of a 70s horror movie.  Statues and replicas made of concrete, plaster, and plywood crumble below a 50-foot steel cross that can be seen from the highway and for miles around.  The large empty parking lot and what remains of a gift shop hint at a prosperous past now long gone.

Closed to the public since 1984, Holy Land USA is still attracts visitors seeking the unusual and slightly spooky.  The park has been the subject of several articles, blog posts and even an episode of The Daily Show.  The 2010 murder of a young woman on the property only added to the lore that has been growing around the site in past decades.

What’s left of Holy Land USA today is a sad reminder of its former glory.  The brainchild of local attorney Walter Baptist Greco, a group of friends and volunteers began work on the site in the 1950s.  Greco, an Italian American, envisioned the park as a way to educate the public about the Catholic religion.  The park opened in 1958, and in its heyday consisted of over 200 structures, grottos, educational signs, and dioramas depicting the life of Christ and passages from the Bible.

During the 1960s and 70s, the park hosted over 40,000 visitors per year and had its own chapel, replicas of Israelite the villages of Bethlehem and Jerusalem, Herod’s Palace, stations of the cross, and a recreation of the Garden of Eden, among its numerous attractions.  Residents of Waterbury and former visitors remember the park’s glory days fondly.

Greco closed the 17.7-acre property to visitors in 1984 for renovations and redesign.  Unfortunately, after his death two years later in 1986, renovation plans were shelved and the park has remained closed ever since.  Greco willed the park to a small order of nuns, the Religious Teachers Filippini, who had been helping Greco maintain the grounds and guide tours since 1972.

Holy Land USA has been the subject of several renovation attempts, but little has been accomplished.  There have also been calls for preserving the spot as folk art.   In the late 1990s a group of boy scouts repaired the Hollywood-style sign as part of a community service program.  Several groups of volunteers have done work on the site over the years, but to little lasting effect, judging by the state of the property today. 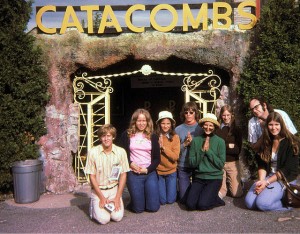 One visible and tangible attempt at restoration is the relatively new cross.  In 2008 the older 56-foot steel and fiberglass cross was replaced by a 50-foot, $250,000 stainless steel cross.   The dedication of the new cross spurned a new push to raise funds for a $10 million renovation project that never got off the ground.

Years of neglect have taken their toll on the once popular tourist destination.  Despite half-hearted attempts at renovation, the park has fallen into advanced disrepair and looters and vandals have picked many of the spots clean; nearly every statue has been decapitated and there is little left of the Garden of Eden and many other attractions.  The entrance to the catacombs is blocked and many if the buildings in the Bethlehem and Jerusalem replicas have fallen over.

Even though there are several “no trespassing” signs, the park is not fenced in and reportedly popular with local teens and other esplorers.  The 2010 murder of a young woman at the foot of the giant cross by one of her friends is one of the latest chapters in the story of Holy Land USA.  The park and land were put up for sale in 2011 for $775,000.  The property is still on the market at a reduced price ($500,000).  A group, “Save Holy Land USA” attempted to raise money to buy the land and convert the park into a children’s camp and campsite for the community.    Unfortunately, they were only able to raise $15.  It is unclear whether this was a serious attempt at raising funds for renovations.

Holy Land USA continues to be a destination for travelers seeking the unusual.  Despite- or probably because of- the creep factor, the Waterbury Region Convention and Visitor’s Bureau receives over 150 yearly calls asking for directions to Holy Land.  There are several interesting if not repetitive pictures of Holy Land USA online, and a wealth of blog posts and articles.

The future of Holy Land is uncertain.  Residents wonder what a potential new owner may do with the property.  While some will not be sorry to see it go, others consider it a part of the local culture.  It seems unlikely that the park will be restored to what Greco envisioned in the 1950s.  What the property will ultimately be used for will depend largely on who buys it and their motivation for doing so.

See more of my articles on Communities @ Washington Times