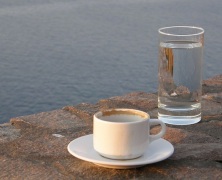 Greek coffee may be the key to a long healthy life

Greek scientists think that a Greek coffee is one of the reasons the residents of Ikaria live longer   From my column at Communities @ Washington Times  WASHINGTON, DC, March 19, 2013 – The residents of Ikaria, a Greek island on the Aegean Sea, live significantly longer than most other communities.  In a study published […]