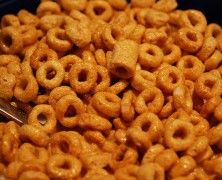 Cheerios now GMO-free: will it make a difference? Not likely.

WASHINGTON D.C., January 6, 2014—General Mills announced Thursday that original Cheerios will be made without genetically modified (GMO) ingredients. While environmentalists and activists are calling the move by the Minneapolis-based food giant a major victory, the change does not necessarily signal a shift in General Mills’ business practices regarding GMOs or GMO labeling. According to […]

WASHINGTON, April 18, 2013 – A recent study by the National Antimicrobial Resistance Monitoring System (NARMS) reveals shocking rates of antibiotic-resistant bacteria in U.S. supermarket meats. An alarming 81% of ground turkey and well over half of ground beef and pork chops tested contained some form of these “superbugs.” Established in 1996 to track antibiotic resistance in foodborne bacteria, NARMS is a […]

From my column in Communities @ Washington Times WASHINGTON, DC, April 2, 2013- A number of recent polls show that a majority of Americans think that animals raised for food deserve some level of protection from harm and exploitation.   Even self- described “meat-eating conservative Republican” Mary Matalin has sided with People for the Ethical Treatment of Animals (PETA) to […]