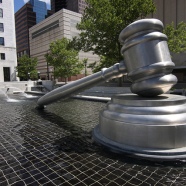 The erosion of Roe v. Wade

Posted by lasesana on August 23, 2012 in Communities @ The Washington Times | Leave a comment

WASHINGTON, August 22, 2012 — Abortion has heated up again as a topic of presidential politics. Incendiary comments and campaign promises to outlaw abortion have flooded the airwaves. However, despite Todd Akin’s controversial comments and Mitt Romney’s position on the issue, which for now have no real impact on abortion law, pro-life judges and legislatures have quietly changed state laws to hamper that choice.

Last month’s ruling in Planned Parenthood v. Rounds by the Eighth U.S. Circuit Court of Appeals reflects how anti-abortion judges and legislators are trying to erode a woman’s right to choose. The court’s en banc decision exposes the conservative strategy of weakening the rights and protections given to women in Roe v. Wade.

In Planned Parenthood v. Rounds, the court declared constitutional a South Dakota law that requires physicians to inform a woman seeking an abortion that “an increased risk of suicide ideation and suicide” is among the “known medical risks of the procedure and statistically significant risk factors to which a pregnant woman would be subjected.” The advisory is necessary to obtain the woman’s informed consent before whe obtains an abortion in the state.

However, there is no scientific proof that abortion causes suicide. There is a correlation among women who get abortions and women who commit suicide, but available research suggests that suicide is caused by underlying psychological factors — not the decision to have an abortion.

The South Dakota law should have been ruled unconstitutional by the court because it is misleading and infringes on a woman’s right to informed consent.

The South Dakota law clearly fails in this respect. The advisory forces doctors to tell a woman that suicide is a “known medical risk of the procedure” and a “statistically significant risk factor to which a pregnant woman would be subjected” if she were to have an abortion. However, there is no scientific support for this assertion, making it misleading and untruthful.

Research shows that there is no causal relationship between abortion and suicide. Most evidence available to the court suggested that suicide is cause by underlying factors like domestic violence, abuse, mental illness, unwanted pregnancy, and youth at the time of pregnancy. Among the evidence presented to the court was a 2008 review on the available medical literature by the American Psychological Association (APA). The review concluded that “the relative risk of mental health problems among adult women who have unplanned pregnancies is no greater if they have an elective first-trimester abortion than if they deliver that pregnancy.” (Quoted in the dissent, p. 32).