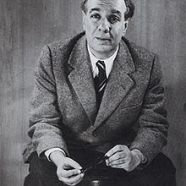 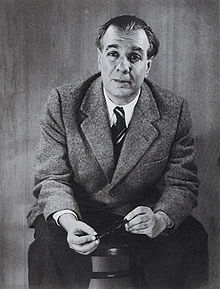 Jorge Luis Borges (1899-1986) is one of the best-known Latin American writers.  It is difficult to summarize Borges in a few sentences.  The best way to get to know Borges is to read his stories.  Many think he was a genius.  His short stories are unique and let the reader step away from reality for a brief time.

This excerpt is part of “Acerca de mis cuentos,” which discusses how he wrote certain stories.  I have tried to find out whether this is an essay or the transcript of a lecture, but have had no success.  Any help on this would be appreciated!

This is a translation on the section about “The Zahir” a short story that appeared in El Aleph (1949).  The translation is mine.  I suggest reading the story and then reading Borges’ comments.

I will try, then, to remember one of my stories.  I was in doubt while I was brought here, and remembered a story I don’t know if you have read; it is called The Zahir.  I am going to talk about how I conceived that story.  I use the word “story” in quotation marks as I don’t know whether it is or it isn’t, but in the end, the issue of genre is of little importance.  Croce believed that there are no genres; I think that they do exist to the extent that there is an expectation on the part of the reader.  I think that a person reads a short story in a different way than they do when they read an entry in an encyclopedia, or when they read a novel, or when they read a poem.  A text may not be different, but the genre may change according to the reader, according to the expectation.  A person that reads a short story knows or expects to read something that will distract them from their ordinary life, that will make them enter a world, not fantastic- the word is too ambitious- but slightly different from the world of common experience.

Now we come to “The Zahir,” and now that we’re friends, I will tell you how I thought of that story.  I don’t remember the date when I wrote it; I know I was working as director of the National Library in south Buenos Aires, near La Concepción Church; I know the neighborhood well.  My starting point was one word, one word we use almost every day without realizing how mysterious it is (except that all words are mysterious): I thought of the word unforgettable, inolvidable in Spanish.  I don’t know why I paused as I had heard the word a thousand times, almost not a day goes by without hearing it.  I thought it would be strange if there was, in what we call reality, an object, a thing- why not?- that was truly unforgettable.

That was my staring point; pretty abstract and limited: thinking about the possible meaning of that word that is heard, read, literally un-forgettable, unforgettable, inolvidable, unvergasselich, inouviable.  As you have seen, it is a pretty shabby consideration.  Immediately I though that if there is something unforgettable, that something must be common because if we had a chimera, for example, a three-headed monster (I believe one head was a goat, another was a snake, and I think the other was dog, I’m not sure), we would certainly remember it.  So there would be no story with an unforgettable minotaur, chimera, or unicorn; no, it had to be something very common. While thinking of something common, I thought, I think immediately, about a coin, as thousands and thousands and thousands of coins are minted, all exactly the same.  All with an effigy of liberty, or a coat of arms, or certain conventional words.  How strange it would be if there was a coin, a coin lost among millions of coins, that was unforgettable.  And I thought of a coin that has by now disappeared, a twenty-cent coin, a coin like the others, like the five- and ten-cent coin, only bigger; how strange if among literally millions of coins minted by the State, by one of the hundreds of States, there was one that was unforgettable.  That’s where the idea was born: from an unforgettable twenty-cent coin.  I don’t know if they still exist, if they are collected, if they are worth anything; I didn’t think about these things at the time.  I thought about a coin that had to be unforgettable for the purpose of my story; in essence, the person who saw it would not be able to think about anything else.

After that I found myself facing a second or third problem…I’ve lost count.  Why would that coin be unforgettable?  The reader will not just accept the idea, I had to prepare my coin’s inviolability, and for that I needed to assume the emotional state of the person who sees it, I needed to insinuate madness, as the subject of my story was something akin to madness or obsession.  I then thought, as Edgar Allan Poe did when he wrote “The Raven,” in the beautiful death.  Poe asked himself who could be affected by the death of that woman, and deduced that it had to be someone that was in love with her.  From there I got to the idea of a woman, who I am in love with, who dies, and I am desperate.