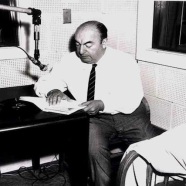 Posted by lasesana on February 18, 2013 in Communities @ The Washington Times | 5 Comments

From my column at Communities @ Washington Times

WASHINGTON DC, February 14, 2013 – Last week a Chilean judge ordered the exhumation of Pablo Neruda to determine whether the Nobel Prize winning poet was poisoned.  Author or Canto General and 20 Love Poems and a Song of Despair, Pablo Neruda passed away on September 23, 1973 — just 12 days after Salvador Allende’s communist government was overthrown by a coup that placed Augusto Pinochet in power.

Neruda, a Communist Party member and close personal friend of Allende would have been a powerful voice against the Pinochet regime had he lived and made it out of Chile.  Recipient of the 1971 Nobel Prize in Literature, Neruda was beloved in his country and respected around the world.

The investigation of Neruda’s death began in 2011 as a result of decades of whispered speculation and conspiracy theories.

Many questioned the poet’s death at Santa María Hospital in Santiago, the official cause recorded as “extreme malnutrition” as a result of complications from prostate cancer.

In early 2011 in an interview in Proceso, a Mexican magazine, Manuel Araya Osorio, Neruda’s chauffer, made public what he had been telling friends and acquaintances for four decades: Neruda was poisoned.  Ultimately prompting the involvement of the Chilean Communist Party and the opening of the official investigation, Araya claims that Neruda died as a result of an injection to the stomach at the Santa María hospital.

According to Araya, Neruda was not really gravely ill, instead, he was taken from his home in Isla Negra by ambulance to Santa María hospital as a ruse to help him escape into exile after the coup.  Araya claims that less than 24 hours before Neruda was set to flee Chile,  a doctor who was not Neruda’s regular physician injected poison into the poet’s stomach.  Neruda died within hours.

From the beginning, Neruda’s friends also questioned the official cause of death from malnutrition, as Neruda allegedly weighed 220 lbs. at his death.   Other sources quote the poet’s weight at the time of his death around 270 lbs.

Among Neruda’s friends questioning the official version of his death is Mexico’s then- ambassador to Chile, Gonzalo Martinez Corbala.  According to Martinez, who visited Neruda both before and after the coup, Neruda was not underweight and did not appear to suffer from malnutrition. http://www.huffingtonpost.com/2012/01/15/pablo-neruda-death-chile_n_1207484.html

Reports from Chile also cite a 1974 interview of the poet’s widow, Matilde Urrutia, in Pueblo magazine, where she states that Neruda’s cancer was under control.    Urrutia said that her husband’s death was so unexpected that he did not even have time to leave a will.  Similarly, an article in the newspaper La Nación quotes Rosa Núñez, a nurse who cared for Neruda for ten years before his death, saying that during a visit between the two women in 1975, Urrutia told her that she believed her husband had been murdered at the hospital.      Urrutia died in 1985.

Poisoning, however, may not be easy to prove nearly 40 years after the poet’s death, according to forensic scientists.

Adding to the uncertainty and confusion, Proceso, the magazine that initially broke Ayala’s story in 2011, also released medical records allegedly part of the investigation that put into question whether Neruda had cancer at all.

Not everybody believes that Neruda was assasinated.  Others claim that Neruda was “clearly ill”  in the time shortly before his death, pointing out that he was even arranging his work for publication posthumously.

Moreover, the Pablo Neruda Foundation and the poet’s family have always stood behind the official version that Neruda died as a result of complications from prostate cancer.  However, after last week’s decision to exhume the body, the Foundation has expressed support for the investigation.

Neruda’s body is buried next to that of his wife, Matilde Urrutia 70 miles from Santiago in Isla Negra.  The exhumation order follows the exhumation of Salvador Allende’s body in 2011.  The investigation into Allende’s death confirmed his suicide and quieted allegations that he was killed by soldiers who stormed the presidential palace during the 1973 coup.

It is still too early to tell whether Neruda’s exhumation will similarly quiet rumors of poisoning or whether it will bring to light one more atrocity perpetrated by the Pinochet regime.  It is also too early to tell what effect the news of a potential assassination will have on Chilean society, which is still healing from the violence and oppression of the Pinochet regime.

The investigation into the poet’s death is expected to take several months and no date has been set for the exhumation.  The Neruda Foundation has echoed many of his readers in asking that this singular poet’s remains be treated with the respect that they deserve.