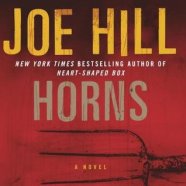 Posted by lasesana on November 26, 2013 in Reviews | Leave a comment

Like Heart-Shaped Box, this novel reminded me of how much I like the horror genre. I loved the premise of the book and thought Hill developed it beautifully.

When Ig wakes up after a night of drinking, he thinks they are the product of a huge hangover. However, while nobody seems to notice the horns, they are compelled to tell Ig their deepest darkest thoughts.

While you would think that this would be a great “super power,” it turns out that it is the opposite, condemning Ig to hearing all of the nasty things people do and think but never admit to anyone, even themselves.

The story moves fast and in unexpected directions, and like Heart-Shaped Box, I found myself thinking, “ok, now what is he going to do for the remaining ¾. ½, ¼ of the book?” But Hill actually pulls it off, holding on to the reader’s attention and curiosity throughout.

Again like Heart-Shaped Box I appreciate that Hill’s novels actually have structure and appear really well thought out from beginning to end. Few horror novelists do this, which is maybe the reason I stopped reading horror for a while. The control freak in me like to feel like the person driving the bus knows where he’s going, and Hill definitely does.

I also like how Hill’s novels include music, which probably dates me, as I think he and I are around the same age. Judas Coyne is heard at some point on the radio, a main character from a former novel.

The book delves into the meaning of good and evil, who we are and what we are perceived to be. In the book, Ig finds that nobody is truly who they seem, and that their thoughts and desires are often quite the opposite of what they appear to be. Like Ig, readers are completely taken by surprise by what people actually think about themselves, Ig, and others around them.

Loved this book, definitely becoming a fan of Hill’s.