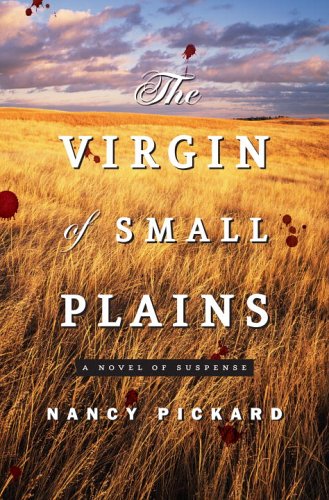 Let me start by saying The Virgin of Small Plains

has very little—if anything—to do with religion.

The novel opens in the middle of a blizzard; it is January 1987 in Kansas and the weather is threatening to kill the newly born calves on Rex’s fathers farm. But when Rex, his brother Patrick, and his father (also the town sheriff) go looking for animals in need of aid, they instead find the body of a young woman. She has clearly been murdered, and Rex knows exactly who she is.

In one night, the lives of several people are changed forever. His parents swear Rex to secrecy, the young woman is never identified, and Mitch, his best friend, is spirited out of town by his father, the county judge, leaving Abby, his girlfriend, and the rest of the town, without an explanation.

When the body is not claimed, the town gives the girl a funeral and buys her a tombstone. Soon after she is said to perform miracles and heal the sick, gaining local fame as the Virgin of Small Plains.

Seventeen years later, with the death of the local judge’s wife, the secret about the Virgin begins to unravel, digging up the past and threatening to take three of the town’s most respected families down with it. Things come to a head when Mitch suddenly returns after so many years of absence.

The plot was entertaining and fast-paced. I had it almost figured out, but only when I was ¾ of the way through and I didn’t figure it all out. Great mystery!

The descriptions of small town Kansas were marvelous, showing the beauty and daunting, destructive power of nature. And of course, there was a huge tornado—it is Kansas, after all.

The book also showed small town America at its best, where occupations are handed down from generation to generation: Rex is the sheriff of Small Plains, just like his father was before him and his father before him; Mitch studied law and even though he was not in town, followed in his father’s footsteps.

The town seems picture-perfect, with a female mayor and life moving along, the fallout from that night in 1987 almost forgotten. That is, until Mitch returns with questions about the Virgin and her death.

Like every small town, Small Plains also has its secrets and not everything is as it seems on the surface.

I liked the characters, even though the main character, Abby (Mitch’s childhood girlfriend and Rex’s best friend) was a little too perfect for my taste. I like my characters with a little mischief and Abby just lacked a bit of spice.

I liked how the author inserted faith into the story without it being denominational, preachy, or overbearing—which is incredibly difficult to do when dealing with anything having to do with spirituality.

All in all, it was a fast, enjoyable read, rooted in the location and small town values.