Home » Reviews » Too Bright to Hear Too Loud to See, Juliann Garey

Too Bright to Hear Too Loud to See, Juliann Garey

Posted by lasesana on March 9, 2014 in Reviews | Leave a comment 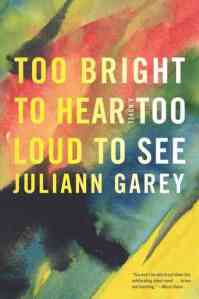 WASHINGTON, March 9, 2014—I usually do not read books about mental illness, but this was on sale on Kindle one day, and, given the glowing reviews, I thought I’d see what all the hype was about.

I absolutely LOVED this book. It was heartfelt, beautifully written, witty, funny, relevant…

When I was one quarter through the book I already knew I was going to give it five stars, but the ending blew me away. NO SPOILERS- I just loved a device used by the author where they finish a book by leaving a precise word in the reader’s mind without actually writing that word. Anybody know if this has a name? The Book of Salt by Monique Truong does the same thing and despite having read it almost 10 years ago, I still remember this magical way to end a novel.

In her debut novel, Garey takes the reader inside the mind of Grayson Todd, Hollywood studio exec turned mental patient. Garey’s portrayal of Grayson’s emotional and mental state, however, makes the reader understand and pull for Grayson, despite the horrible things he does to everyone around him.

Too Bright to Hear Too Loud to See also sheds light on how mental illness is usually ignored in our society, often to the point where it is too late to help the individual or anyone around them. It also portrays society’s reaction to mental illness from the 1950s and 60—through Gray’s father’s illness—until the late 90s.

In the novel, mental illness is either ignored and covered up by family members, “managed” with drugs or alcohol by the sufferer, or treated through—at least to the layman—archaic and inhumane methods like electroconvulsive therapy— and this is in the 90s!

Granted, I know very little about mental illness—perhaps another symptom of what is wrong with the way we treat the mentally ill in our society—but I was shocked to see the portrayal of modern treatment for the mentally ill.  Not quite One Flew Over the Cuckoo’s Nest, but not different enough to make me feel comfortable.

I was also left with the impression that had Gray’s illness been managed better, he would not have destroyed his life or hurt his family as much. However, it also left me questioning what is a better way to manage a condition like Gray’s? It seems like there are few answers.

Reader reaction to this book was interesting. While some people absolutely hated it, hated Grayson, it appears to have touched a nerve in others.

One of the things that I found most touching and where I think Garey really shines in her debut novel is in how effective it is at communicating the fear that a person with mental illness experiences constantly. The description of the thoughts going through Grayson’s mind communicates the terror and uncertainty that someone in his position must feel. However, the book is not as depressing or “heavy” as it could be because Garey’s humor and superb writing find a unique balance that make the novel entertaining and engaging.

Fantastic novel, can’t wait for Garey’s next one!

← Venezuela in Crisis: a Brief Summary of WHO, WHAT and WHY Best of Arbiter News →