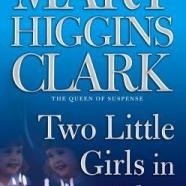 This is probably a book I should have put down after the first chapter. I can’t remember reading Mary Higgins Clark, but I thought that since she was so popular, the novel would be pretty good. WRONG!

The story begins ok, I guess, even though it was a tad cliché. The babysitter is alone in a dark house, children asleep in their beds, parents at dinner. The babysitter hangs up the phone, hears a muffled cry upstairs, runs to the nursery, but before she can reach it, she is knocked out by an assailant that crept up behind her. When she comes to, the three-year-old twins she was taking care of are gone.

The novel starts to unravel from the beginning. For starters, as soon as the babysitter comes to, she tells the police that the man that came up behind her smelled like sweat. Now, I’m no doctor, but I thought that generally, when someone is knocked out by a concussion, it is normal that they cannot remember the events that occurred directly before the incident.

Okay, okay, so not everyone experiences post-concussion amnesia, so I let it go and continued to read. Then came more clichés: Kelly “wailing like a banshee” was my favorite. “Wailing like a banshee” is one of the most hackneyed, overused clichés in writing, so much so that I thought that serious editors had blackballed it a long time ago. She also uses the word “suds” to describe what one of the character is drinking. There were a few other gems, like “going into” pneumonia instead of just getting it.

There are also several spatial and time problems. For instance the mother talks about how one of the twins hit her knee in the bedroom and at the exact same time, the other twin in the kitchen grabbed her knee. So, was the mother teleporting between the kitchen and bedroom to be able to tell what both her daughters were doing at the exact same moment in separate rooms of the house? Don’t get it… Don’t let me get started of the descriptions of streets in New York…

The name of the villain was also pretty stupid, “the Pied Piper.” Really?

The characters were also flat and unbelievable; the fact that there were so many police and FBI officials was confusing and difficult to keep straight. The worst, however, was the inner monologue of the 3-year-old twins: they were able to figure out that the kidnappers were using fake names, what they wanted them to do, what they were planning to do, etc. in a way that was so unbelievable that it just made me want to put the book down and gag.

Since I read this book for its representation of Connecticut, in that sense it was a little better. The book portrayed Connecticut as an extension of NYC, where everyone works and where a large part of the action takes place. The author did little to describe the state and the little town the family lived in, except in relation to the big city, giving the reader the impression that Connecticut is just a forgotten branch of the city without a character of its own.

All in all, a terrible read that you should only pick up if you are on a 13-hour flight and there is no other form of entertainment. Even then, you may want to think twice and open Sky Mall.