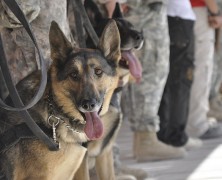 From my column at the Washington Times Communities WASHINGTON, January 10, 2013 – Working dogs form an important part of today’s military. Dogs have been used in warfare by ancient Egyptians, Persians, Greeks, Slavs, and Britons.  During the Roman Empire dogs were arranged in columns and wore armor and spiked collars.  Dogs were also used by […]

THIS ARTICLE NEEDS CORRECTION AND EDITING- CHECK BACK SOON From my column at the Washington Times Communities WASHINGTON DC, December 15, 2012- Military dogs that go overseas are classified as equipment and abandoned after they serve. Several organizations are lobbying to change this status while they help to bring dogs home and try to place them […]