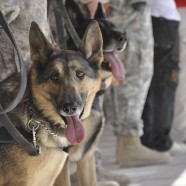 Posted by lasesana on January 22, 2013 in Communities @ The Washington Times | 3 Comments

Dogs have been used in warfare by ancient Egyptians, Persians, Greeks, Slavs, and Britons.  During the Roman Empire dogs were arranged in columns and wore armor and spiked collars.  Dogs were also used by Attila the Hun and Frederick the Great.  Napoleon chained dogs to the walls of Alexandria to warn of enemy attacks.  Dalmatians were used on the borders of Dalmatia to warn of Turkish attacks from Croatia.

By the early 1900s, France, Belgium, Russia, and especially Germany used military dogs for scout duty, to warn of enemy attacks, find the injured, and to carry supplies and messages during combat.  Even though dogs were used in the Spanish-American War and Civil war, the US officially began training dogs for the US army in 1942.   During WWII, 15 war dog platoons served overseas as part of the army’s K-9 Corps.  Dogs have served in Korea, Vietnam, Desert Storm, Afghanistan, and Iraq with bravery and distinction.  Today, military working dogs are trained at Joint Base San Antonio- Lackland for all branches of the military.

Like members of the military, working dogs go through battle training and face combat, explosions, and gunfire.  Often dogs are sent into dangerous situations to protect the lives of their handlers and other soldiers.  Military working dogs are invaluable in detecting explosives and chasing down an enemy on foot.  According to some estimates a military dog saves around 150 soldier lives throughout its service.

There is also much to be said about the bond that forms between war dogs and soldiers.  They spend 24 hours a day together; they train, eat, sleep, and fight together.  Many handlers consider working dogs their buddies and fellow soldiers.  Many soldiers credit these dogs for saving their lives on the battlefield and providing much needed companionship.

There are currently between 2,500 and 2,600 dogs deployed with American troops overseas.  About 400 military dogs are retired from service yearly; 430 military dogs were adopted in 2011.  There is usually a waiting list of about 300 to 400 potential adoptive owners.

There are several misconceptions about the fate and treatment of retired military working dogs.  Perhaps this is because historically, the military’s treatment of these animals in the past has not been exactly stellar.  Nearly 5,000 dogs were sent to Vietnam, and only around 200 returned to the US.  The rest were given to the South Vietnamese army, abandoned, or euthanized.

Tech. Sgt. Joseph Null, the Military Working Dog adoptions coordinator at Lackland explains that even though this was not a proud moment for many involved, the sacrifices made by these dogs paved the way for the much improved humane treatment and respect that these animals get today.  It was because of the dogs that were left behind and the impact that leaving them behind had on their handlers, who later became lobbyists and advocates, that Robby’s Law (10 U.S.C. 2583) was passed.

Signed in 2000 by President Clinton, Robby’s Law allowed for the adoption of military working dogs (and horses owned by the DoD) by their handlers, law enforcement agencies, and civilians capable of caring for them.  Additionally, under this law, the Secretary of Defense must submit an annual report to Congress accounting for all of the dogs adopted under the program, those awaiting adoption, and those euthanized.  For dogs that are euthanized, the report must specify the reason for euthanasia instead of adoption.  All 11 reports can be found here.

Contrary to popular belief, the military no longer euthanizes an animal simply because it cannot find a home for it.  The only reasons for euthanasia, according to Tech. Sgt. Null, and appearing on the reports, are (1) to prevent suffering and (2) because the dog is too dangerous/aggressive.  While it is true that many adoptable dogs were euthanized prior to 2000, thanks to Robby’s law, this is no longer a practice.  Today, a dog that is suitable for adoption is not euthanized by the military under any circumstances.

Neither are dogs left in combat zones, as many believe.  Like their human handlers, some military dogs are deployed to combat zones, and like their handlers, they are always brought back to their duty stations.  However, once the dog is at the duty station, transportation from the station to the adoptive home is not paid for by the military.

A lot has been made of this fact.  Many advocates claim that dogs are not being brought back from overseas because even though many in the US would like to adopt them, they simply cannot afford the transport cost, which can run up to $2,000.

Colleen McGee, Public Affairs Chief at Lackland, and Tech. Sgt. Null both agree that this is simply not the case.  While it is true that the military does not pay for the transport once the animal has been adopted, 95% of dogs are adopted by their handlers.  If a handler is on active duty and relocating from an overseas base, they are allowed one pet as part of their moving costs, so transportation is generally not an issue.  When transportation of the animal does become an issue, which happens extremely rarely (four times in the last 2 ½ years), adoptions coordinators at Lackland have been able to take advantage of their network of supporters to find an adoptive owner willing to pay for transportation costs.

So while maybe the military should pay for the transportation costs, no dogs are being euthanized or abandoned because adoptive owners cannot pay for their transportation back to the US, as many recent reports, including my own, stated.

Another misconception is that adopting a military working dog is a deliberately long and complicated process.  This is also untrue.  A process that once took seven to eight months currently takes about nine days, according to Tech. Sgt. Null.  The only reason potential adoptive owners may face a delay is because there is a long waiting list of people who want to adopt a military dog.

While Robby’s law went very far in making sure that military working animals are treated humanely and with respect, even after they retire, many advocates say that the law does not go far enough and are currently lobbying for an amendment that would reclassify dogs as manpower, provide for the animals’ transport to the US, and allow military veterinarians to treat the retired animals after they have been adopted.

Republican Congressman Walter Jones has currently submitted to the Congressional Budget Office a bill that would reclassify military working dogs as “K-9 members of the armed forces” and make them eligible for official medals.  The cost-analysis response from the Budget Office is expected in mid- February of next year.

Even though several organizations are involved in helping these animals both while they serve and after they retire, only Lackland handles military working dog adoptions.  Operation Military K-9 sends care packages to military working dogs and their handlers.  People who want to donate may send money or put together their own care package from a list of needed items.  Other organizations, like US War Dogs Association help injured military dogs and their handlers heal and grow together once they have returned home.  Yet others like Military Working Dog Adoptions and Save A Vet lobby and raise awareness of issues related to military working dogs.