Posted by lasesana on August 19, 2012 in Communities @ The Washington Times | 1 Comment 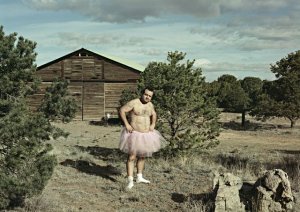 No, there isn’t.  Especially if the guy is wearing it for the woman he loves and a great cause.

While the sight of a big burly guy in a pink tutu may be out of the ordinary, Bob Carey’s pictures speak to a large number of people.

The pictures feature Carey in parking garages, in a field surrounded by cattle, hanging from a blue neon palm tree, waiting in an empty New York subway station, jumping around on the beach- in nothing but a pink tutu.

Professional photographer Bob Carey first donned the minimal ballerina gear as part of a charity project for the Arizona Ballet.  When he relocated from Phoenix to Brooklyn in 2003, Carey continued taking photographs in nothing but a pink tutu, mostly as a humorous way to cope with so much change.

Six months after moving, Carey was struck with the news of his wife Linda’s breast cancer.  The photographs took on a new purpose and the Tutu Project was born.

Linda beat her first battle with cancer but suffered a recurrence in 2006.  She is still fighting. “During these past nine years, I’ve been in awe of her power, her beauty, and her spirit,” Writes Carey on his website.  “Oddly enough, her cancer has taught us that life is good, dealing with it can be hard, and sometimes the very best thing—no, the only thing—we can do to face another day is to laugh at ourselves, and share a laugh with others.”

Some pictures are beautiful, others are whimsical and bizarre, but they all communicate something.  To me his pictures convey a man’s love for his wife and his singular way to cope -with a very personal brand of humor, art, and beauty.

Carey has been shooting on location around the country for the last nine years, his wife Linda and their dog constantly at his side.  “We make a great team,” Carey commented.  Linda helps scout locations, runs PR with the local police, helps to guard the equipment, and critiques the work.  “Depending on where I am, many of these images have just happened,” says Carey.  “I see a great background and then I figure out how to make the photo happen….I’d have to say that the majority of the time I see something that inspires me to put on the tutu.”

← Live Below the Line: Final day Of the Challenge Baby Hatches Raise Controversy in Germany →