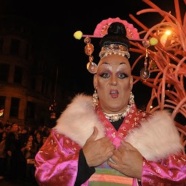 Posted by lasesana on November 4, 2012 in Communities @ The Washington Times | Leave a comment

From my column at The Washington Times Communities

WASHINGTON, November 3, 2012 — After being postponed due to Hurricane Sandy, Washington, D.C.’s 26th annual high heel race came off without a hitch on Thursday. The D.C. High Heel Race takes place every Tuesday before Halloween on 17th Street NW, starting on R Street.

The High Heel Race has long been a part of the Dupont Circle neighborhood and a beloved tradition for many D.C. and area residents. There are few rules to be eligible to race: You have to be in drag, wear high heels, have a great attitude, and sign a waiver. It is open to anyone who wants to take part, and hundreds participate every year.

As a relative newcomer to the D.C. area, the race has become one of my favorite events.  17th Street is filled with a carnival atmosphere where everyone is happy and in the mood for a laugh.  It is also a way for the city to support its LGBT community in a kind of block party scenario.

Before the race begins, contestants parade up and down the route, being photographed with and by the crowd. The costumes range from the hastily thrown together to the very elaborate and creative. This year the most visible group was the “save the gay reef” faction, decked out in hundreds of balloons, with a shark and several fish to boot.  Another group dressed as the hosts from The View, wheeled their interview table up and down the street conducting interviews with members of the crowd. They later ran the race, table and all.   They didn’t win. The winner this year was a newcomer to the race and reigning Mrs. J.R.’s, William Dennis.

Newcomers and local drag icons all take part. Many racers have been participating since the race’s inception in 1986. “I remember when this was just a small event with a few dozen people,” says one of the participants who has been part of the race from the beginning.  “Today there are thousands of spectators and it’s our one night to feel like celebrities.”

Many participants agree that it is the crowd’s attitude toward the race, racers, and LGBT community in general that makes the race so special. “I have not heard one negative thing all night,” says another racer. “Tonight is one of the nights when we can come together with the rest of the community and feel supported.”

That’s the thing about the Race; most of the crow is not gay, but everyone is there to support the LGBT community. It is also a night to mingle with friends and neighbors, visit the local bars, and celebrate the culture of Dupont Circle. It is not a raunchy event, there is no nudity and everything is PG, PG-13, at most. Every year there are more and more children at the race, enjoying the party and learning a valuable lesson in tolerance and community.

The event is also unique in that police lines or barriers do not separate the crowd from the racers. It is kind of an honor system where the crowd of thousands agrees to stand back to let the ladies run. Even the police got into the fun this year, helping competitors warm up by racing them on their Segways to the delight of the crowd.

The neighborhood’s support for the race has never been stronger. Formerly run by David Perruzza, owner of J.R.’s, a local bar, for 25 years, management of the race was shared with Dupont Circle Main Streets this year, further cementing the event as an integral part of our neighborhood identity. According to D.C. Councilman Phil Mendelson, who announced the start of the race, “the diversity is one of the things that makes D.C. a great place to live in.”