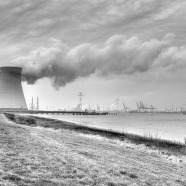 Nuclear plant at Fukushima leaking since 2011

Posted by lasesana on July 17, 2013 in Communities @ The Washington Times | 1 Comment

WASHINGTON, July 12, 2013 — The Japanese nuclear power plant at Fukushima is thought to have been leaking contaminated water into the Pacific Ocean for the past two years, according to Japan’s Nuclear Regulation Authority. The announcement came after experts from Japan’s nuclear regulator analyzed readings of radiation levels in the waters surrounding the plant.

← Exercise alters DNA On abortion, does Maryland have the right idea? →