Home » Communities @ The Washington Times » Big Brother 15: Do we need to have a talk about the open racism? 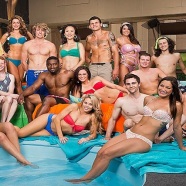 Big Brother 15: Do we need to have a talk about the open racism?

Posted by lasesana on July 20, 2013 in Communities @ The Washington Times | Leave a comment

WASHINGTON, July 18, 2013 – The racist, homophobic, and sexist atmosphere in CBS’s “Big Brother” house this season has led to two cast members losing their jobs. Even though the cast members are unaware of the general focus on race in the past week, their words and actions may be indicative of a conversation we all need to have, regardless of the Zimmerman verdict.

On its 15th season, CBS’s hit summer reality show locks a group of people in a house and films them 24 hours a day.  The cast members are not allowed contact with the outside world and are unaware of how they are being perceived by the public.  This season, CBS has introduced a new twist, where viewers can vote to influence who gets the $500,000 prize.
Read more: http://bit.ly/15Ma7cH

← On abortion, does Maryland have the right idea? Just picked this baby up at a garage sale for $50, Vintage NSU (1940s?) bicycle →