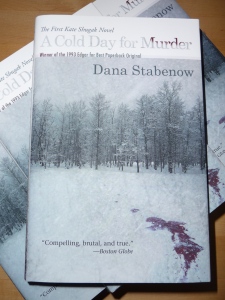 Part of my Mysterious USA Challenge

A Cold Day for Murder

introduces Kate Shugak, a young Aleut woman who worked in the Anchorage D.A.’s office, but has returned to her home in a fictional park in northern Alaska after a horrifying experience with a child molester.

Still suffering from the aftermath, Kate has become a recluse on her homestead in “the Park,” with only Mutt, a half-wolf, half-Husky, for company.

A park ranger with a powerful father has gone missing in the Park and so has the FBI agent sent to find him. Having nobody else to turn to, her former boss asks Kate to take over the search.

Knowing the Alaskan wilderness better than anyone and being related to half the Park’s inhabitants, Kate knows she is the best person for the job and reluctantly agrees.

In her search, Kate is forced to reconnect with her family and friends living inside the Park. With rich description and dialogue, Stabenow plunges the reader into the beautiful and inhospitable terrain of Alaska during the winter as well as the hardships of daily life.

The descriptions of the landscape communicate the grandeur and wide expanses of the Alaskan wilderness beautifully. However, the novel also communicates its frailty and the pressures that threaten to destroy its natural resources and the lives of those who have lived there for hundreds of years.

Stabenow plunges into the topics of development and access to remote, unspoiled areas that are home to traditional societies.

The author seems to have a deep understanding of the intricacies of family ties, tribal loyalty, the importance of tradition and adaptation, and how these can suddenly force us to face difficult decisions.

The novel also discusses the particular social, economic, and political issues faced by Native Americans in the past and today. In this sense, Kate is a bridge between both worlds, having been born and raised in the Park, but leaving for college and working in Anchorage.

While her ability to move and function between her native heritage and the white man’s world may make her an extremely accomplished investigator, it has forced her to not only make difficult decisions, but has also shown her the worst aspects of the relationship between Native Americans and other members of society.

The mystery of what happened to the two young men is interesting, but I have to admit that I found the description of life in the Park and the characters that inhabit it more interesting. However, the plot was entertaining and made sense- if you paid attention, you’ll know what happened too.

Go back to reviews

Go back to Mysterious USA challenge