Home » Cycling » The Bicycle Helmet: to wear or not to wear?

The Bicycle Helmet: to wear or not to wear?

Debating whether helmet laws save lives or discourage cycling 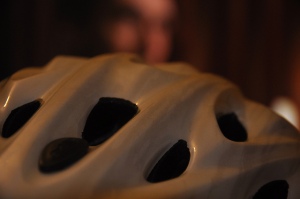 From my column in the Washington Times Communities

WASHINGTON DC, October 24, 2012- Last month, a friend and cycling blogger sent me an article and asked me whether I wore a helmet when I rode my bicycle.  I said that I did wear a helmet, but the truth is, I should have said I wear one most of the time, depending on the ride.  And, if personal experience and observation holds, a lot of people do the same.  The question of whether to wear or not to wear a helmet is heating up, with strong arguments on both sides.

There is no doubt that if you are in a bicycle accident involving a head injury, a helmet may very well save your life or prevent brain damage.  Many argue however, that while there is a very small chance of being in a bike crash involving a head injury, forcing people to wear helmets discourages mass-ridership, which in turn would save far more lives by preventing heart disease, obesity, diabetes, etc. than bicycle helmets ever will.

This is a tricky proposition.  It sounds like the question of whether it is permissible to sacrifice one life to save many.  The truth is that bike accidents do and will happen. Some riders will be severely injured and even killed.  Helmets will prevent many of these injuries and save lives.  On the other hand, it is also true that fatalities are rare and many studies show that compulsory helmet use discourages ridership.

A Bike helmet can save your life

According to the National Highway Traffic Safety Administration’s (NHTSA) 2008 Traffic Safety Facts, 70% of cyclists involved in a fatal crash suffer from head injuries, and helmets are 85 to 88% effective in preventing head and brain injuries.   The NHTSA calls helmets “the single most effective way to reduce head injuries and fatalities from bicycle crashes.”

All major organizations that have anything to do with health, safety, and transportation in the US advocate the use of bike helmets all the time.  This is turn has created a cultural philosophy around bike helmets.   Basically, if you don’t wear a bike helmet you’re perceived as antisocial and reckless.  In the US, not wearing a helmet while riding your bike is like smoking or talking on your phone while driving your car.

Personally, since I started riding as an adult only recently, I never questioned the helmet mentality.  When I thought about wearing a helmet, I associated it with wearing a seatbelt: annoying but stupid if you don’t do it, and pretty soon you forget about it and it becomes second nature.

The situation is very different in Europe.  France, Italy, Germany, the UK, and Switzerland have no mandatory helmet use laws.  Other European countries have helmet laws for children.  However, there does not seem to be a higher rate of cyclist fatalities, and all of these countries have high ridership and mature cycling cultures and structures.  In major European cities and towns, the focus is not on helmet use but on providing a safer cycling infrastructure and slowing or prohibiting traffic completely around city and town centers.

Now on to the more controversial proposition.

Several studies suggest that making helmets compulsory will discourage many people from riding a bicycle at all, which in turn will cause more deaths through diabetes, heart disease and obesity than helmet-less accidents.  Less riders also means that it will be more difficult to build up a safer cycling network and reap the benefits of mass-ridership.

Proponents argue that aggressive helmet use campaigns and promotion makes a relatively safe activity seem a lot more dangerous than it really is, and this, in turn, turns off a lot of potential riders.

According to many scientific and not so scientific studies, the single biggest factor that discourages people from riding their bike more is fear.  The argument goes like this: while cycling is statistically as dangerous or less than walking down the street, stepping into your tub, or climbing a ladder, when asked to wear special “body armor” to cycle, a large number of people will perceive it as more dangerous than it actually is and will refrain from doing it altogether.  According to the European Cycling Federation, cycling is just as dangerous as walking per mile traveled; yet people are not asked to wear a helmet to walk down the block.

There may be some truth to this claim.  I, for one, was terrified of riding my bike in the city and it took me literally years to work up the courage to do it.  I’m not sure my fear was completely tied to the fact that local wisdom says you should always wear a helmet and that made me fearful of riding, but after two years, I can honestly say that it is far less scary than I initially perceived, and I wish I would have done it sooner and not been so frightened.

There is also the issue of trying to develop a safe cycling network, a big part of which has become the development of a robust bike- sharing program, which in turn may be at odds with compulsory helmet laws.  There is evidence that a city bike-sharing program is more likely to be popular if that city allows riding without a helmet.  Mexico City seems to agree, as it recently repealed a mandatory helmet law before inaugurating its bike-sharing plan.

The DF may have learned from other cities.  Consider Melbourne, Australia, with a compulsory helmet law and a bike-sharing program with an average of 150 rides per day.  Compare this with Dublin, Ireland, where bike helmet laws are relaxed and their bike-sharing program has an average of 5,000 rides per day.  While there may be other factors that account for this difference, it is important to note that while Dublin is full of hills, has cobblestone roads, and cold and rainy weather, Melbourne is flat, has wide paved roads, and mild weather.  Consider also that Melbourne’s population is 4.1 million, while Dublin’s is 1.2.

Major American cities are also foregoing compulsory helmet use for adults in favor of growing their bike–sharing programs.  DC makes helmet use compulsory for children under 16 years of age.  A recent Georgetown study found that around 70% of those who use the city’s wildly popular Capital BikeShare do not wear a helmet.

Similarly, New York has failed to enact a compulsory helmet law, even as the city awaits the opening of its own 1,000 bicycle bike-sharing program in 2013.  However, New York City is pursuing an aggressive education and free helmet programs to encourage helmet use.

In her article, Elizabeth Rosenthal quotes European researchers as saying that “ the test of a mature bike-sharing program is when women outnumber men.”  However, in most, if not all North American cities male riders outnumber females, sometimes 2 and even 3 to 1, both on bike-shares or private bikes (there are exceptions, of course).  In the US, women accounted for only 24% of bicycle trips taken in 2009, according to The National Household Travel Survey.

The same is not true in other countries where helmet use is not compulsory and not so aggressively promoted.  In the Netherlands, for example, women account for 52% of cyclists.  In Germany female ridership is 49%.  European cycling proponents suggest that more women ride in Europe because these countries focus on providing safer bike lanes and slowing traffic in city centers rather than promoting helmet use.

Why do women ride less in the US?

As discussed above, compulsory helmet use and aggressive promotion may discourage many women from riding by making cycling seems more dangerous than it really is.  Linda Baker’s “How to get More Bicyclists on the Road” suggests that women are a kind of “indicator species” of a safe and mature cycling structure because women are more risk-averse than men.  If helmet promotion makes cycling seem like it presents more risk than it really does, more women than men will refrain from doing it at all.  On the other hand, according to Baker, if more women ride, their risk aversion translates to a demand for a safer and more comprehensive bike infrastructure (what you see in Europe).

Fashion has also been cited as one of the reasons women do not cycle more.  It may be difficult to wear professional attire and arrive at the office smelling fresh if you have to cycle 20 miles.  The same can be said for a date or lunch with friends.  However, for women who travel shorter distances, having to wear a helmet could be a deciding factor on whether to commute by bike.  Let’s face it; you cannot get to the office or an important meeting with a helmet head, so instead many professional women forego riding altogether.

So, to wear or not to wear your helmet?

Compulsory helmet use for children is a no-brainer.  Of course they should wear a helmet and I have no problem with legislation making helmet use mandatory for minors.  However, the more I learn about the subject, as well as from personal experience as a novice city rider, the more unsure I am about whether I need to wear one all the time.

I have a confession to make.  I don’t wear my helmet that much.

After two years of riding every day to pretty much the same places, I must admit, I don’t wear my helmet every time if the ride is a few blocks and there is a bike lane route.  I’m lucky that I live in DC and in a neighborhood where almost every other street has a bike lane and traffic is relatively light and slow.  I also work from home.

My gym is .6 miles away and I don’t wear a helmet when I ride there.  I don’t wear one to go to the store three blocks away, or when I go out to dinner in the neighborhood with my husband.  On the other hand, I wear a helmet for longer rides or any ride that takes me where a bike lane will not.  I also always wear one when I go on a fitness ride.  But near home, no, I don’t wear my helmet.  If I were forced to, I probably wouldn’t ride as much.

There, I said it.  I feel like I just admitted to killing a puppy…

To be on the safe side, I still advocate wearing your helmet every time.  As John Kraemer, assistant professor of health systems administration at NHS says in the Georgetown Study,

“Bikers can’t always control the environment around them, but they can control whether they wear a helmet.”

But it does make you think…

Go back to Cycling