Home » Cycling » Bikeonomics: The Economics of Riding Your Bike

Bikeonomics: The Economics of Riding Your Bike 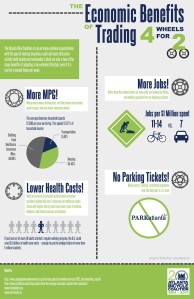 WASHINGTON DC, October 11, 2012–  Step out on a weekday at 8:45 am on the intersection of U and 15th streets in NorthWest DC, and there are dozens of bicycle riders on the bike lane, waiting for their dedicated traffic light to change.  Some are dressed in suits, others more casually.  Some people are riding expensive looking bikes, some ride more run-of-the-mill bikes, and there are more than a few red Capital Bikeshare bikes.

DC, like many other US cities, has made a substantial investment in bicycle infrastructure in recent years and its residents and businesses have responded with enthusiasm.  This is probably because individuals, commercial establishments, companies, and local governments have begun to recognize that cycling makes economic sense. The local business marketing trend is important to stay on top of, keep your eye on the ball!

Good for the individual: cycling makes you healthier and saves you money

Cycling can literally save lives and money.  According to a 2011 study by the University of Wisconsin of 11 Midwestern cities, if the residents ran half of their short-distance errands (under 2.5 miles) on a bike for only four months out of the year, it would prevent 1,100 deaths and save over $7.3 billion in healthcare costs annualy.[i]  Healthcare savings would result from accident reduction, better fitness, and increased air quality, which would in turn reduce cases of heart attacks, asthma, and strokes.  Cycling may even improve the health of some people who don’t ride, because as ridership increases, air quality improves for everyone, not just cyclists.

Similarly, a 2011 University of Northern Iowa Study found that Iowa’s 175,000 recreational riders and commuters saved an estimated $87 million in health care costs.[ii]  The savings were in the form of treatment for diabetes, breast cancer, heart disease, stroke, and colorectal cancer.

However, individual savings are not limited to healthcare.  According to AAA, it costs an average American around $8,485 per year to own a car. On the other hand, a new bicycle costs between $300 and $400 (including a lock, lights, fender, and other accessories), and around $70 to $100 per year to maintain.  Even though most are not willing to get rid of their cars completely, cycling to work or to the store a few times a week is likely to save a at least a few hundred dollars a year in fuel and parking costs.

Good for the national and local economy: Bicycle and bicycle-related spending

Cyclists buy bicycles and bicycle accessories.  Cyclists also travel to events and spend money on transportation, lodging, food, and other goods and services.  Cyclists in a community means more money staying in the local economy stimulating local business.  There has even been a correlation between access to bike paths and a rise in home values in certain communities.

By League of American Bicyclists

On a national level, the revenue and amount of jobs created by the bicycle and bicycle-related industry are significant.  In 2011, according to the National Bicycle Dealers Association, the US bicycle industry generated $6 billion in sales of bicycles, parts, and accessories.[iii]  The report Bicycling Means Business: The Economic Benefits of Bicycle Infrastructure by the League of American Bicyclists and the Alliance for Biking and Walking, concluded that there are almost 16,000 bicycle businesses in the US, employing over 70,000 individuals.[iv]  Moreover, the same report states that there are over 60 million recreational cyclists in the US, spending over $46.9 billion on transportation, food, lodging, and entertainment.  A 2006 study by The Outdoor Industry Foundation found that additional spill-over spending from bicycle-related activities may be up to $133 billion resulting in around 1.1 million jobs.

Bicycle tourism also generates a large amount of revenue for some local economies.  Rides and bicycle events bring hundreds of thousands of visitors and their dollars to communities that they would otherwise not visit.  While in the area, participants, spectators, organizers and sponsors boost the local economy by patronizing restaurants, hotels, campgrounds, and other businesses.

RAGBRAI is probably the best-known cycling event in the United States.  A 2008 study by a University of Iowa professor stated that for the same year the direct spending for RAGBRAI was around $16,908,642, and indirect and induced spending was estimated at $24.5 to $25.7 million.[v]

But even though it is one of the best-known cycling events in the US, RAGBRAI is by far not the only one.  According to a 2011 pilot survey of 11 large bicycling events by the Bicycle Tour Network (formerly Bicycle Tour Directors Association) spending for the 11 events was estimated at over $32.5 million.[vi]  An even larger survey found that there were over 1,700 riding events with more than 1,000,000 participants in the US in 2008.  Recreational road riding events generated total revenue of over $240 million for the same year, and participants spent an estimated $140 million in food, lodging, transportation and other expenses at these events.[vii]

Increased ridership among a community promotes the local economy by creating a market for locally owned bike shops, bike repair shops, and bicycle parking stations.  It also creates jobs in these businesses and  residents are left with more money to spend closer to home.   According to Grist.org, in 2010 $1.5 billion was contributed to Wisconsin’s local economy by bike-related commerce and industry.   Similarly, in 2008 Portland benefited by $90 million from the local bike economy.[viii]

Many critics argue that sacrificing on-street parking in order to build bike lanes would hurt local businesses.  However, several studies, including a 2009 study by the Clean Air Partnership in Toronto, show that shoppers who walk or cycle to a business are more likely to return and spend more money in the area than people who drive there.  The Toronto study predicted that instead of harming local businesses, bike lanes would increase commercial activity on the street.[ix]

Another way businesses benefit from increased bicycle ridership is in the area of employee health insurance.  Several companies have started to provide a number of incentives and programs to encourage employees to bike to work.  A study of the effects of an employee health and wellness program (including an incentive for biking to work) at Quality Bicycle Products (QDP) released earlier this year by HealthPartners concluded that the program increased employee productivity and reduced healthcare costs.  The study suggested that the nearly 100 employees who commuted by bicycle cost the company $200,000 less per year in healthcare claims compared to employees who did not bike to work.[x]

Many companies are taking cycling seriously.  According to the Bicycling Means Business study, “as of spring 2012, 409 companies in 42 states and the District of Columbia have been designated Bicycle Friendly Businesses for their efforts to encourage bicycling.  Another 111 businesses have received honorable mention.  Collectively, these businesses employ over 630,000 workers and draw countless customers.”[xi]  Bicycle Friendly Businesses encourage their employees to cycle to work, provide bicycle parking and select bike-accessible locations.

Access to bicycle and pedestrian networks may also raise residential property values.  Studies in several urban and suburban centers have found a measurable effect of access to bike transportation on home values.  All other factors being equal (square footage, number of bedrooms, bathrooms, garages, porches, etc.), houses closer to a bike path usually sell for a better price.  For example, a 2006 study of Delaware Property Values found that homes closer (50 m) to bike paths sold for an average of $8,800 more than similar homes with no bicycle path accessibility.[xii]   A similar 2004 study of home values in Indianapolis close to the Monon Trail found that homes closer to the trail sold for an average of 11% more than other similar homes.[xiii]

Good for All levels of government: Tax revenue, job creation, and ROI

As discussed above, the US’s over 60 million recreational cyclists spend $46.9 billion on transportation, food, lodging, and entertainment and additional spill-over spending from bicycle-related activities may be up to $133 billion.  This results in around $17 billion in federal, state and local taxes.

While investment in cycling and pedestrian infrastructure is relatively small, the returns are considerable.  Generally, governments get a far greater return for their investment in bike infrastructure than on road construction and maintenance.    For one thing, it is much less expensive to add capacity for cyclists than for drivers.  For example, according to Portland Mayor Sam Adams in 2011, it cost the same amount to t build Portland’s entire 300-mile bicycle network, as it would have cost to build one mile of urban highway.[xiv]

Governments must first invest in cycling infrastructure for ridership to increase and to reap the economic benefits.  Even though most people would like to ride a bike more often, the biggest reason that people do not ride is fear of riding on roads with cars.  It has been shown that dedicated bike lanes and trails go a long way in alleviating these fears and getting people outside and on their bikes.

Critics argue that there is no guarantee that people will actually use the infrastructure if it were built.  However, a small investment in infrastructure can raise ridership and walking significantly.  For example, the 2005 Federal Transportation Bill authorized $100 million for The Nonmotorized Transportation Pilot Program (NTPP), which provided $25 million to four communities to build an infrastructure network of sidewalks, bicycle lanes, and trails connecting residential areas with schools, transit centers, businesses and commercial districts.

The Final Report on the Program was submitted to Congress in April 2012.  The Report stated that over four years, there was an overall increase in bicycle ridership of 49% and walking of 22% in the four communities.  Additionally, trips taken by bicycle instead of by car increased by 36% (walking 14%).  Even though there was in increase in bicycle ridership and walking in these communities, pedestrian and bicycle crashes resulting in fatalities did not increase and even decreased in some communities.  Finally, it is estimated that the pilot communities saved 7,701 tons of CO2 in 2010.[xvi]  In conclusion, the Program was a success and showed that if communities invest in bike infrastructure, residents will respond.

More people on bikes also means less cars on the street.  As discussed above, this leads to an increase in air quality, meaning that even people who don’t ride a bicycle experience health benefits from increased ridership.  Traffic and noise reduction also raises the quality of life for city residents.

It seems that cycling makes sense for everyone except maybe automobile manufacturers and fuel companies.  Maybe the movement toward cycling is a reflection of a greater movement toward more sustainable ways of life, less waste, and a healthier lifestyle.  I know cycling has worked for me: I’m in the best shape of my life, I have a few more dollars in my pocket, and my city, Washington DC, is prospering and seems like a happier, healthier place.

[viii] Elly Blue, “How bicycling will save the economy (if we let it)”

[xiv] “Portland Mayor Sam Adams says Portland’s spent on its bike infrastructure what it would normally spend on a single mile of highway,”http://www.politifact.com/oregon/statements/2011/mar/19/sam-adams/portland-mayor-sam-adams-says-portlands-spent-its-/,  Retrieved October 11, 2012.

[xvi] Report to the U.S. Congress on the Outcomes of the Nonmotorized Transportation Pilot Program, http://www.fhwa.dot.gov/environment/bicycle_pedestrian/ntpp/2012_report/final_report_april_2012.pdf, Retrieved October 11, 2012.

← Gone Girl, Gillian Flynn Amazon Kindle Readers: You may have some money coming to you! →